We offer a wide range of high quality of teaching and extra-curricular activities.

Osh International Medical University is committed to a cozy learning community in which the distinguished academic and administrative staff focus on the educational and developmental needs of the students. We proudly declare to be a student oriented Medical University. We are determined to create a unique Medical higher education institution with commitment to excellence. 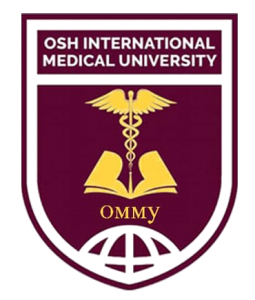 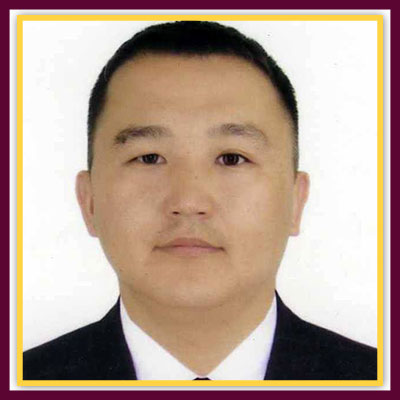 “We believe that the future of our country, region, and humanity will depend on well-educated people and strong leaders. Our Doctor of Medicine program is designed to educate these leaders in Medical field.
Our academic programs are offered in state-of-the medical facilities and our students live and learn in an environment which is aesthetically pleasing, academically stimulating, and culturally enriching. While we take seriously our role in preparing students for medical career, we also recognize that University is more than just classrooms and coursework. As such, we encourage students to participate in athletic and cultural events on campus as well. Indeed, there is something to fit the unique interests and abilities of every student at Osh International Medical University
We are committed to building a community that is devoted to student success and values, individual learning, growth and service. It underscores our core values of honesty and integrity; respect for diversity; engagement in the community; and committing to reason, promoting peace, open-mindedness and globalization.
It is a true privilege to lead a Medical University that is a definite excitement each day! I look forward in helping our students their own unique stories.” 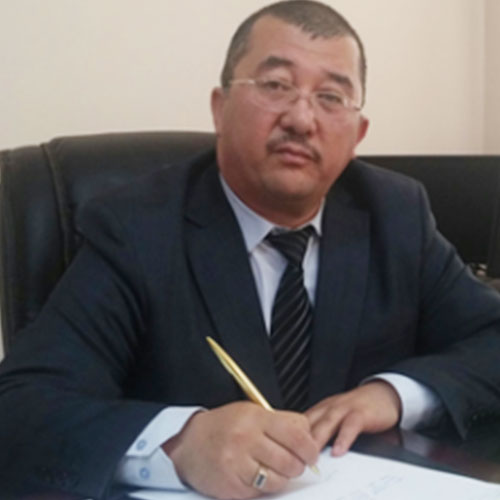 It is my distinct pleasure to welcome our new and returning students, residents, faculty, and staff. It’s truly one of my favorite times to be at the Osh International Medical University. Each year, the arriving classes of new students bring with them such an exhilarating sense of promise and possibility.
Our mission as an institution is to teach with creativity and dedication, to heal with quality and compassion, and to inspire discovery and innovation with integrity and resolve. As we prepare for another academic year, the OshIMU community renews that commitment to improving the health and wellbeing of our local, national, and global communities.
Each day, we realize this mission through our faculty’s dedication to teaching critical skills to hundreds of medical, health sciences, and graduate students, as well as residents, preparing them for the challenges that lie ahead in the future of health care. Our faculty members are leaders in the field of medical and health education, working with both national health education organizations and the federal government to establish standardized learning techniques and develop national policies.
Our ideals, partnerships, and unique opportunities enable each of us to live up to the mission of the Osh International Medical University. We look forward to supporting the personal and professional growth of our medical, health sciences, and graduate students, as well as our residents, and faculty members.
With warm wishes for a rewarding year, 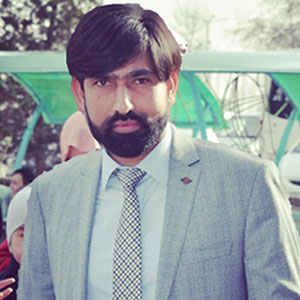 Welcome to Osh International Medical University and to the Office of International Affairs.
Osh IMU’s founding vision of providing Medical education at times and in places convenient to students paved the way for many of the university’s past international education programs, initiatives and activities, and continues to guide us as we develop future global efforts that connect Osh IMU to the world.
Today, Osh IMU has more than 1,000 international students from over 116 countries studying on campus, and well over 1,000 international students are taking courses online and in blended instructional delivery formats at our select international sites in the Caribbean, Europe, Asia and Latin America. Osh IMU has alumni in over 63 countries around the world.
The Office of International Affairs serves as a base for the university’s international initiatives and student services, and includes the Office of International Students and Scholars (OISS) which is dedicated to providing immigration, orientation, counseling and overall assistance to all international students, visiting scholars, and faculty on and off campus. The OIA also provides ongoing assistance and support for all members of the university community engaged in campus internationalization and globalization efforts.
I urge you to take advantage of everything Osh IMU has to offer, and to become a global ambassador for your country while you are here. Together, we can learn from each other and help promote multicultural awareness, harmony and peace around the world. Welcome to the Osh IMU global network! 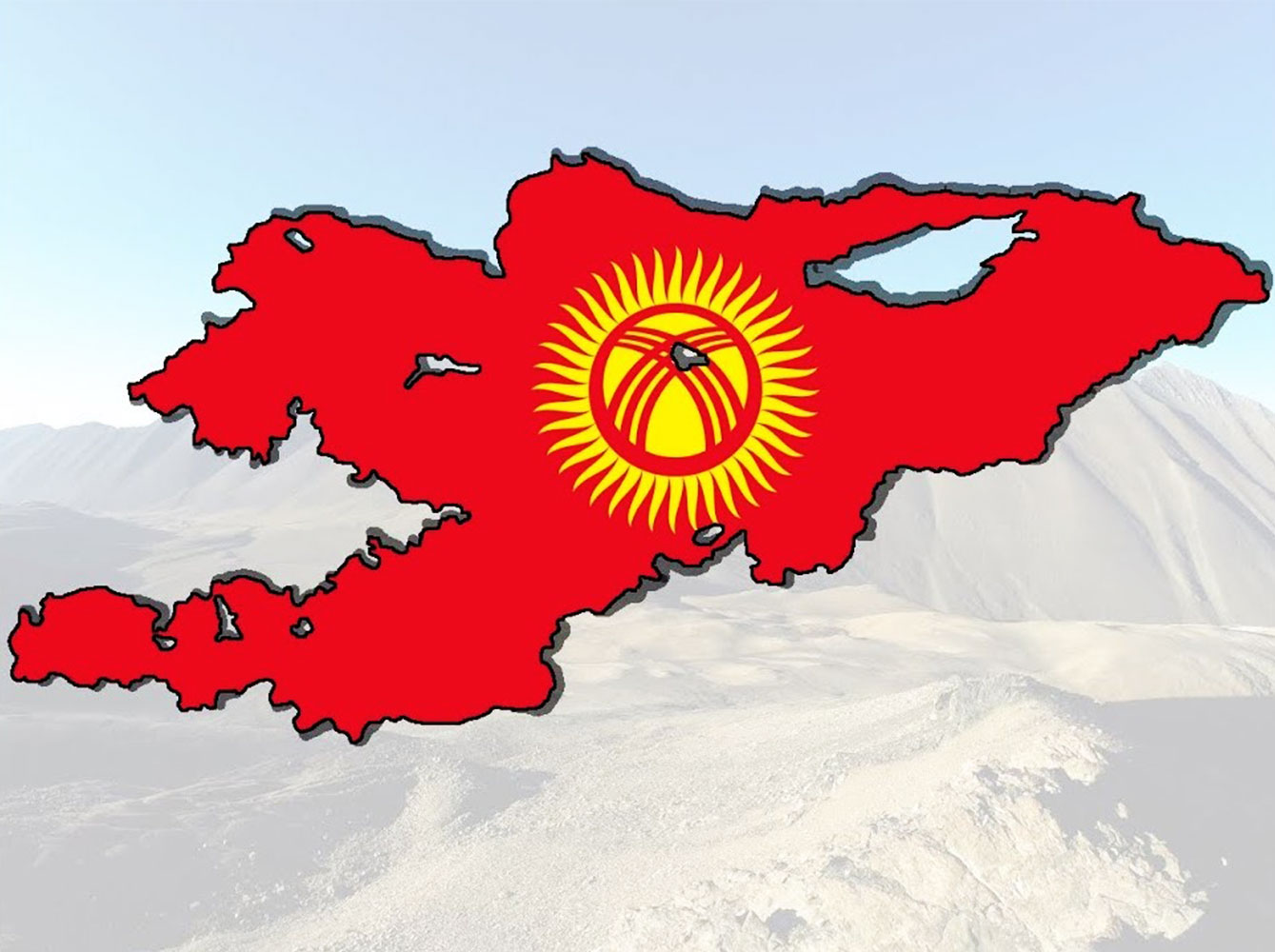 The mountainous region of the Tian Shan covers over 80% of the country (Kyrgyzstan is occasionally referred to as “the Switzerland of Central Asia”, as a result), with the remainder made up of valleys and basins.
Issyk-Kul Lake, in the north-eastern Tian Shan is the largest lake in Kyrgyzstan and the second largest mountain lake in the world after Titicaca. The highest peaks are in the Kakshaal-Too range, forming the Chinese border. Peak Jengish Chokusu, at 7,439 m (24,406 ft), is the highest point and is considered by geologists to be the northernmost peak over 7,000 m (22,966 ft) in the world.
Kyrgyzstan has significant deposits of metals including gold and rare-earth metals. Due to the country’s predominantly mountainous terrain, less than 8% of the land is cultivated, and this is concentrated in the northern lowlands and the fringes of the Fergana Valley. 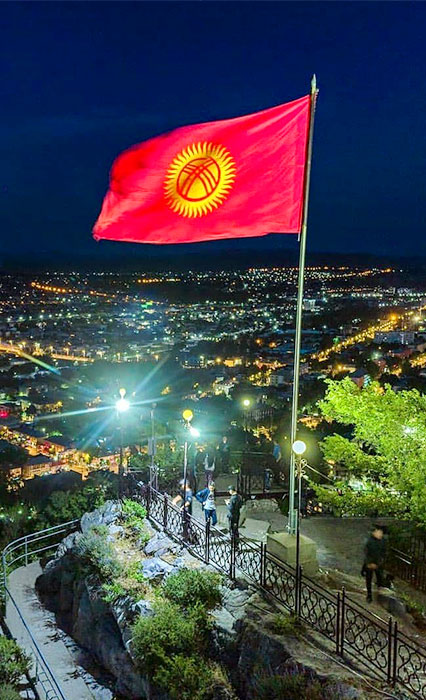 Osh has been a student city, a center of education, science, and technology for the last one thousand years. Osh, a mountainous city located in the heart of the historically famous Ferghana valley. The second-largest city in Kyrgyzstan. Osh is the administrative center of southern Kyrgyzstan, Southern capital of Kyrgyzstan, and the capital of the Osh region.
There are a lot of places for refreshment activities, a sports stadium, sports centers, swimming pools, billiard clubs, a winter sports center with skiing tracks and other winter sports, a number of cinemas with the latest English, Russian and Indian movies. Spare time can be spent in restaurants, drama theatres. concerts of famous Russian and Kyrgyz singers are often held at concert halls of the city. There is a lot of cafés, restaurants in the city, with fast food, Italian, Russian, Uzbek, Chinese, Pakistani and Indian cuisine. As Osh is a mountainous city, a hill station, summers are very beautiful. People come from other cities to Osh to spend their vacations and enjoy the beauty of nature. Weather in Osh is continental with temperature in summer ranges from +15°C to +30°C and in winter ranges from – 5°C to +15°C. There are the boulevards and parks with lots of trees.
Osh is definitely a city where you could walk around for hours, just to get to know the culture and try to feel it yourself. Reputedly three thousand years old, Osh is one of the oldest cities in Central Asia. In the middle ages, Osh was a point of intersection for commerce from India and China to Europe. One of the branches of a Great Silk Way – the Major Trade of an old age passed through the city connecting East with West.
The city has several monuments, including one to the southern Kyrgyz “queen” Kurmanjan Datka and one of the few remaining statues of Lenin. The second-largest mosque in the country and the 16th-century Rabat Abdul Khan Mosque can be found here. The only World Heritage Site in Kyrgyzstan, the Sulayman Mountain, offers a splendid view of Osh and its environs. 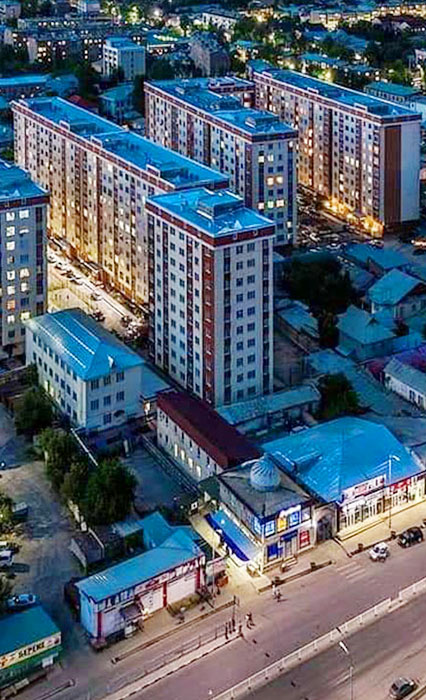 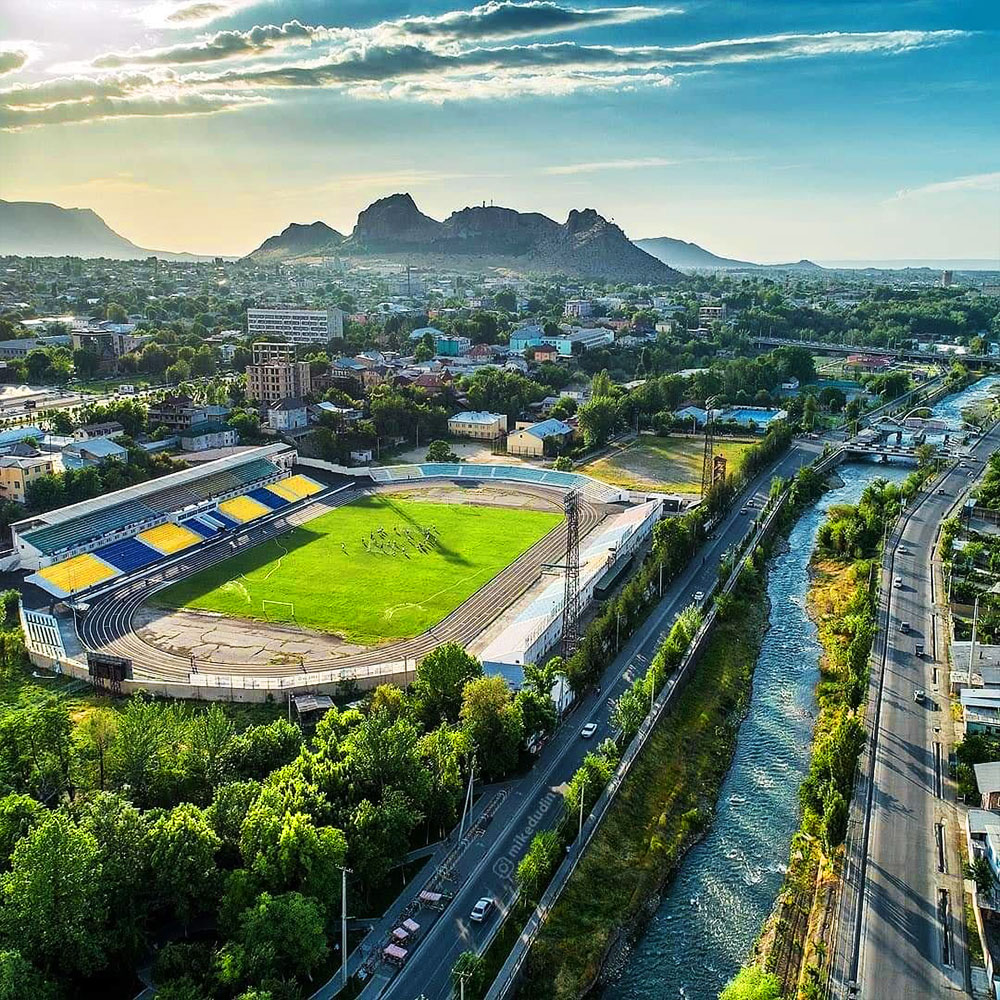 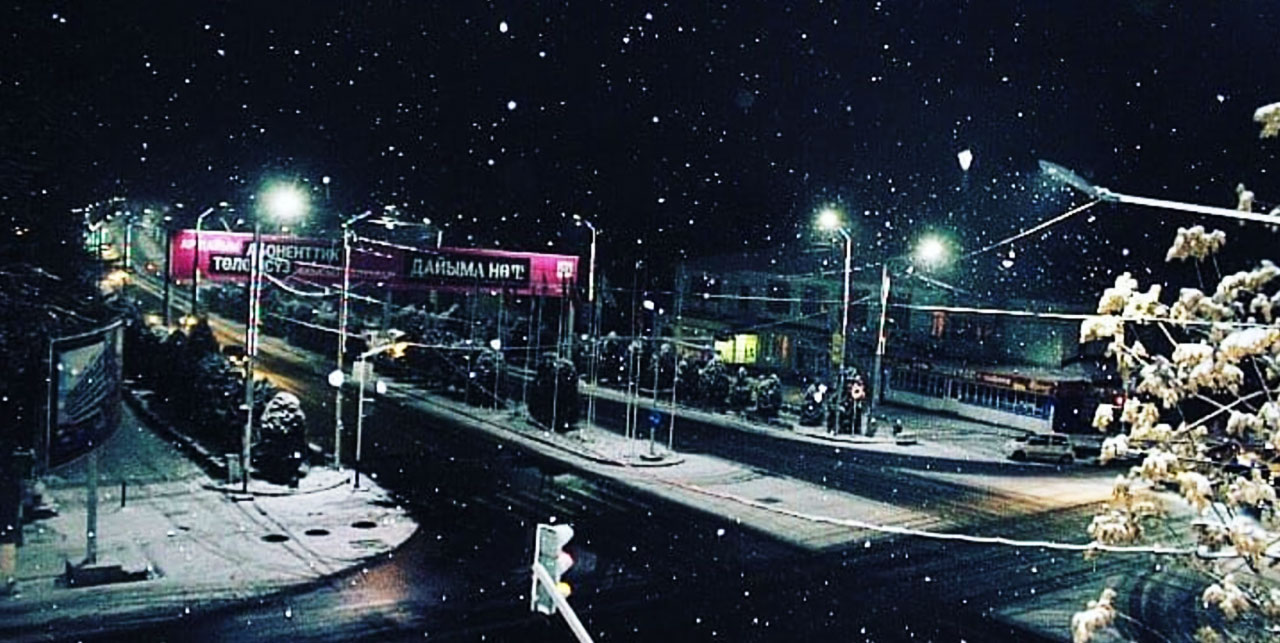 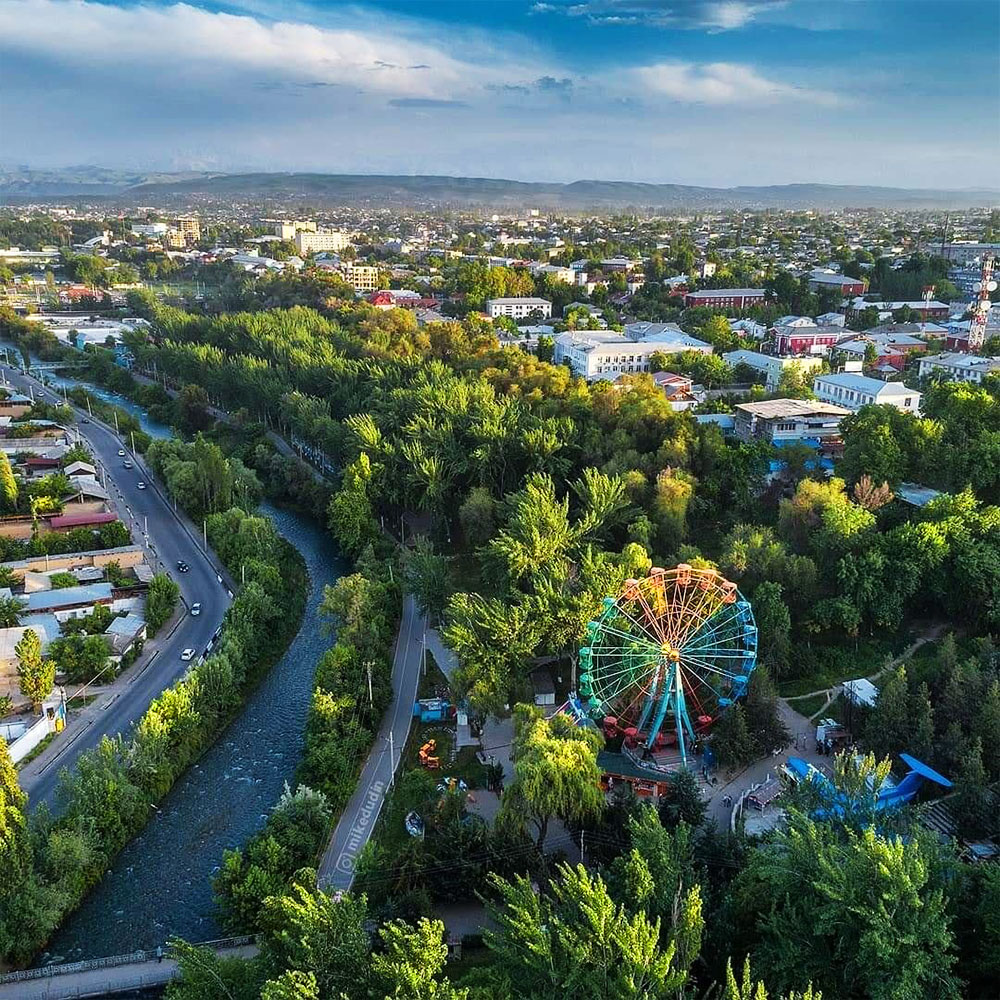 One of the most popular tourist destination points in Kyrgyzstan are the lake Issyk-Kul and Osh region. Numerous hotels, resorts and boarding houses are located along northern shore of the Issyk Kul. The most popular beach zones are in the city of Cholpon-Ata and the settlements nearby, such as Kara-Oi (Dolinka), Bosteri and Korumdy.
Some of the most popular locations for camping are southern Osh, the area between Naryn City and the Torugart pass, and the mountains and glaciers surrounding Karakol in Issyk-Kul. Kyrgyzsstan is popular for its skiing resorts and winter sports. 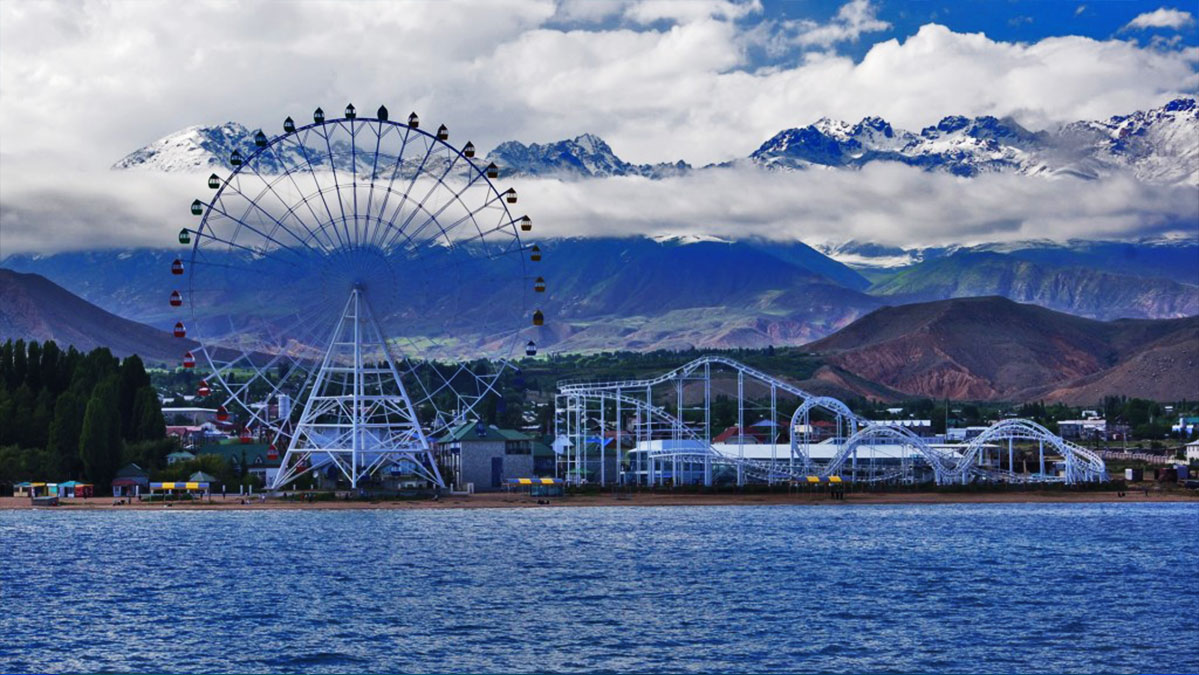 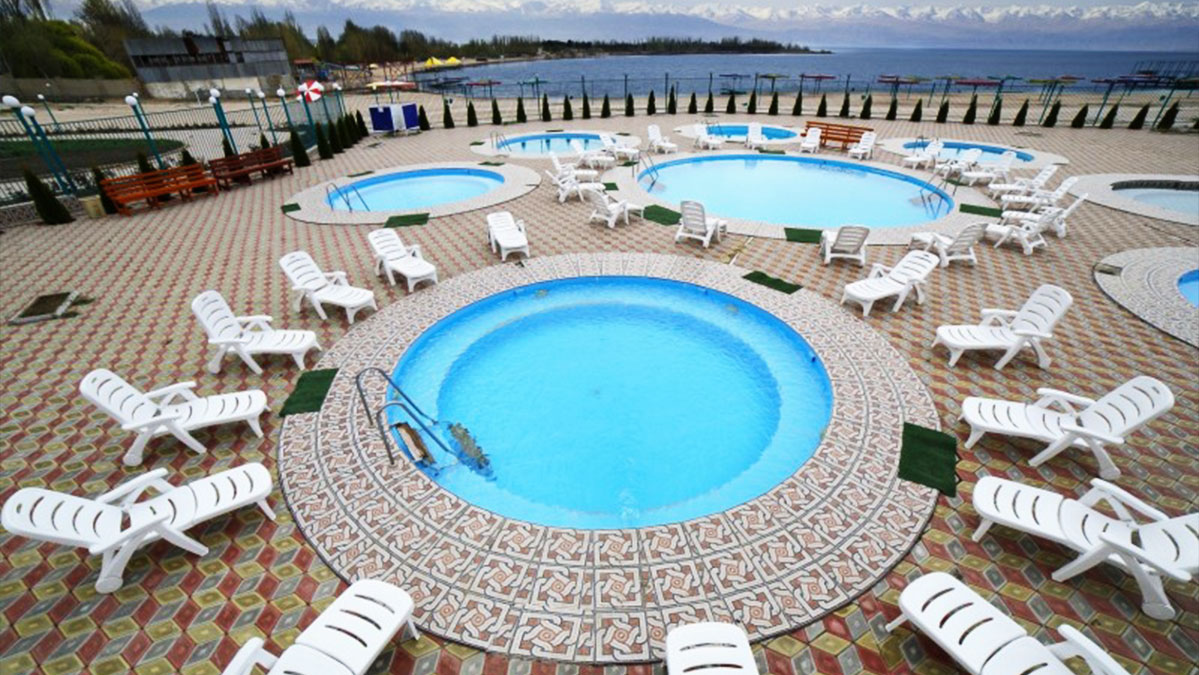 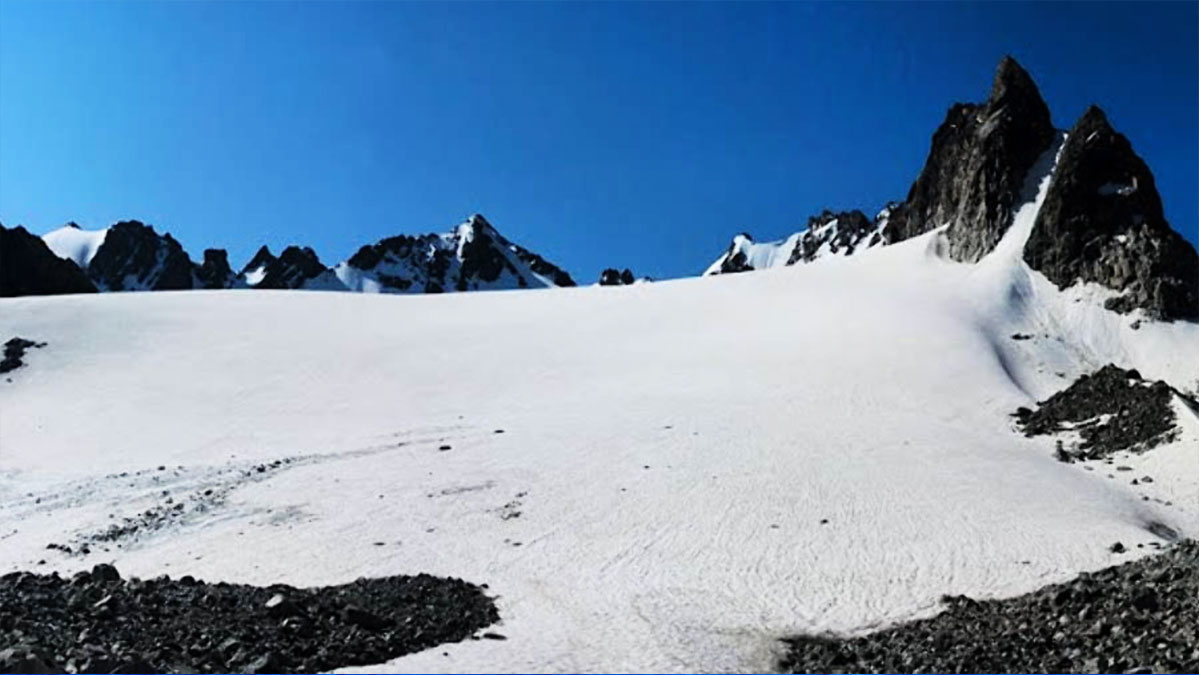 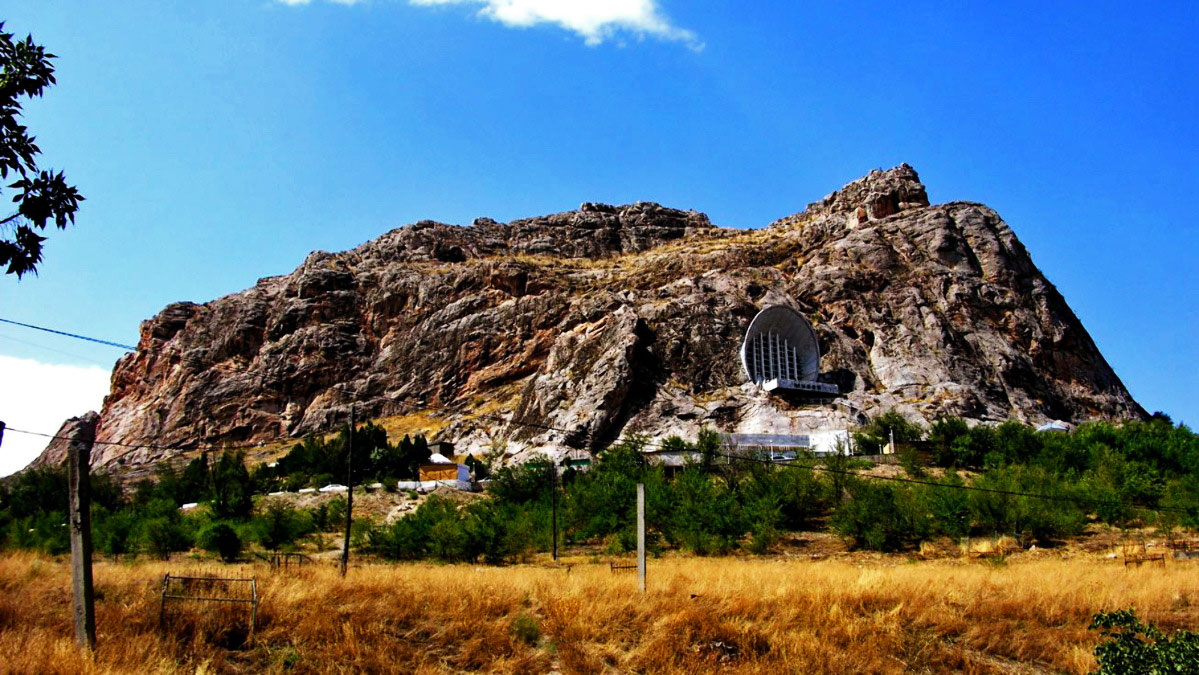 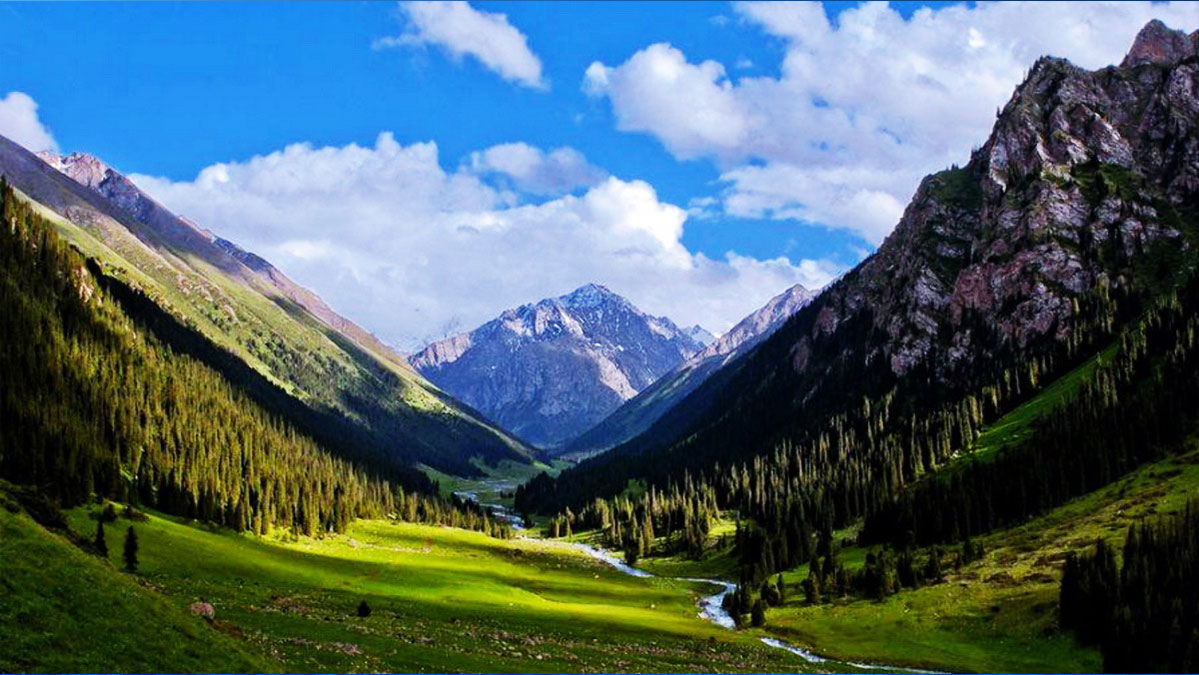 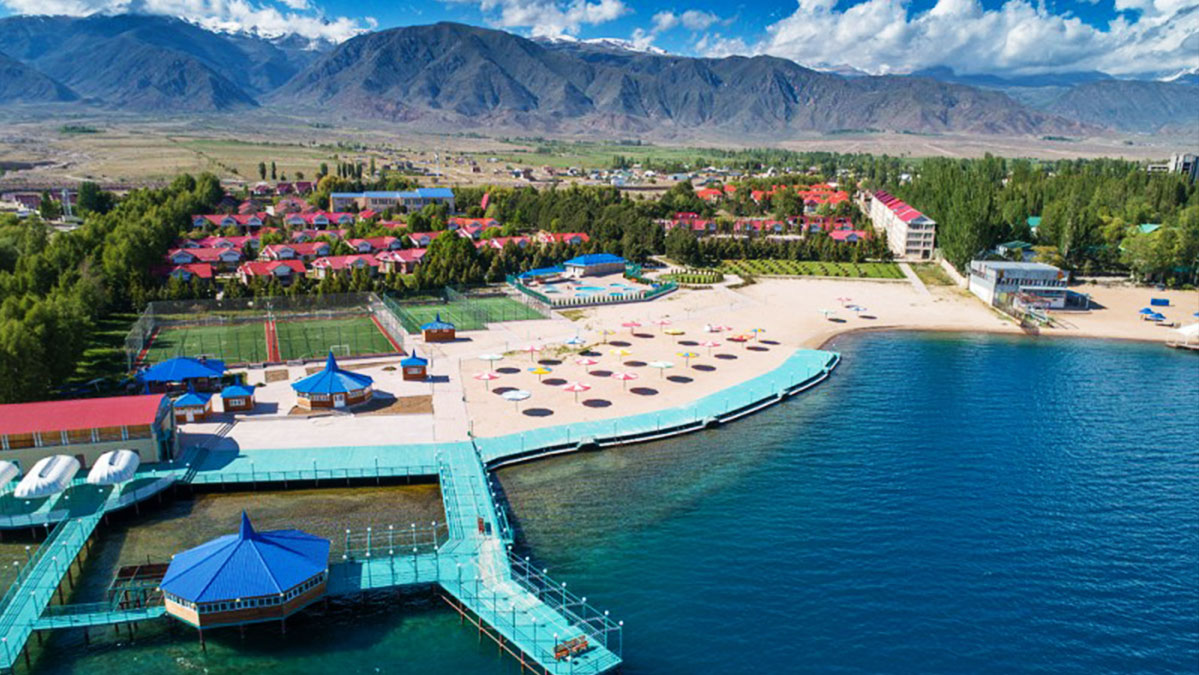 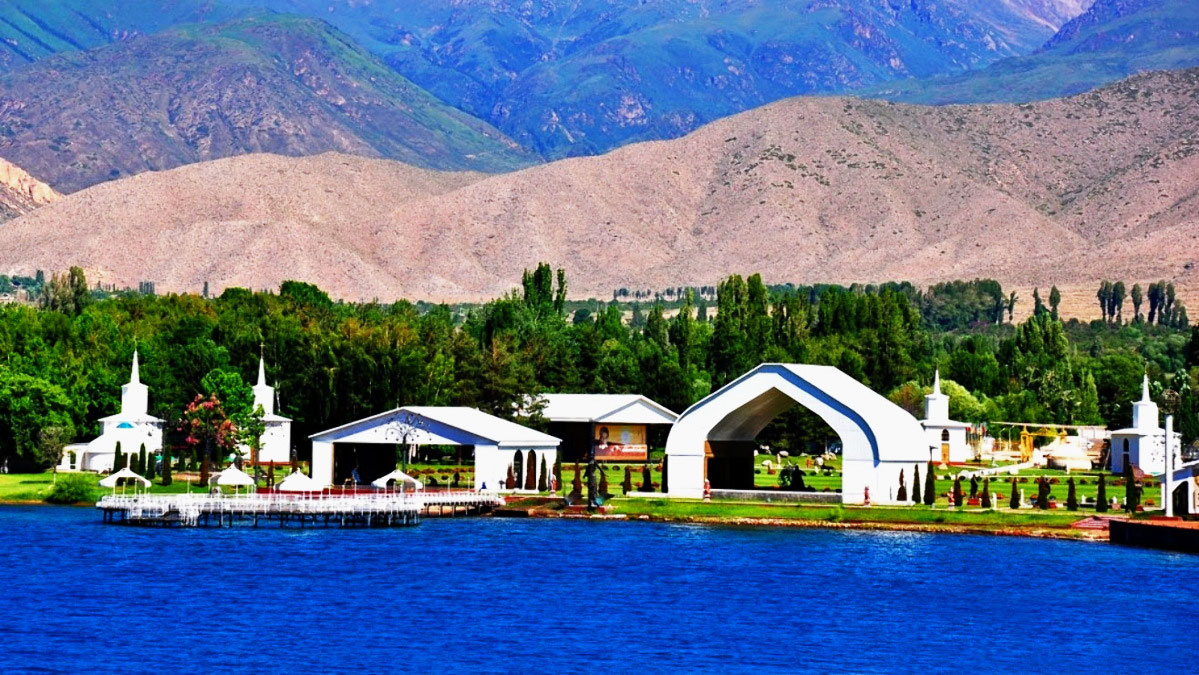 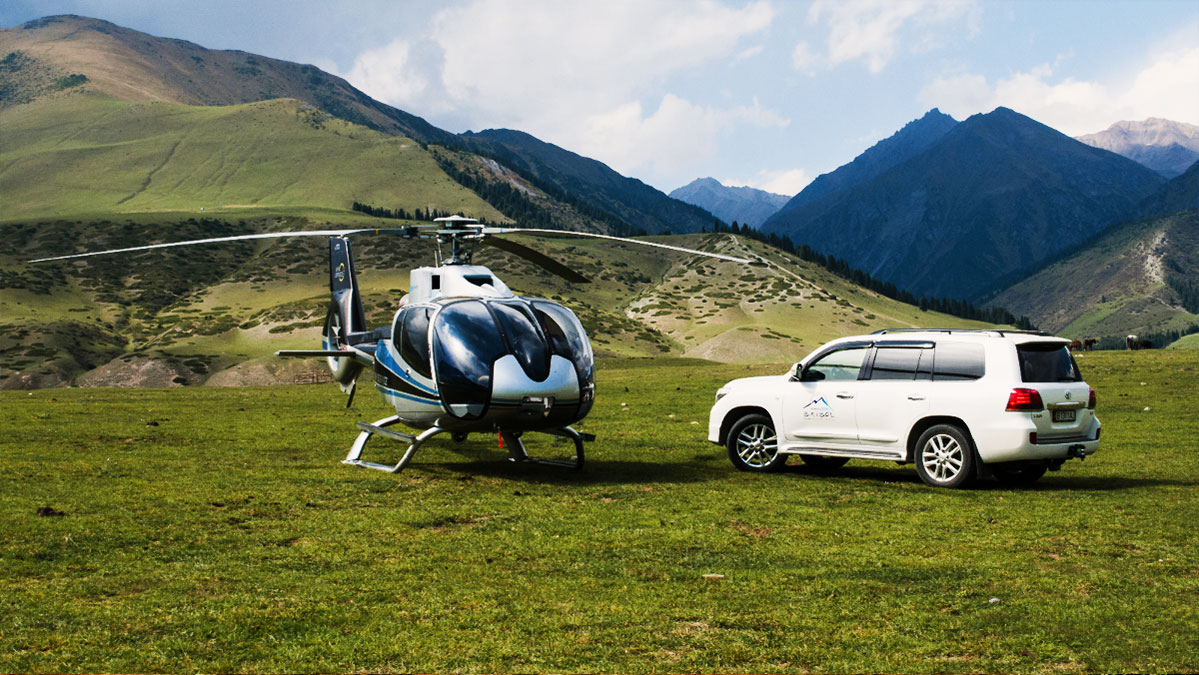 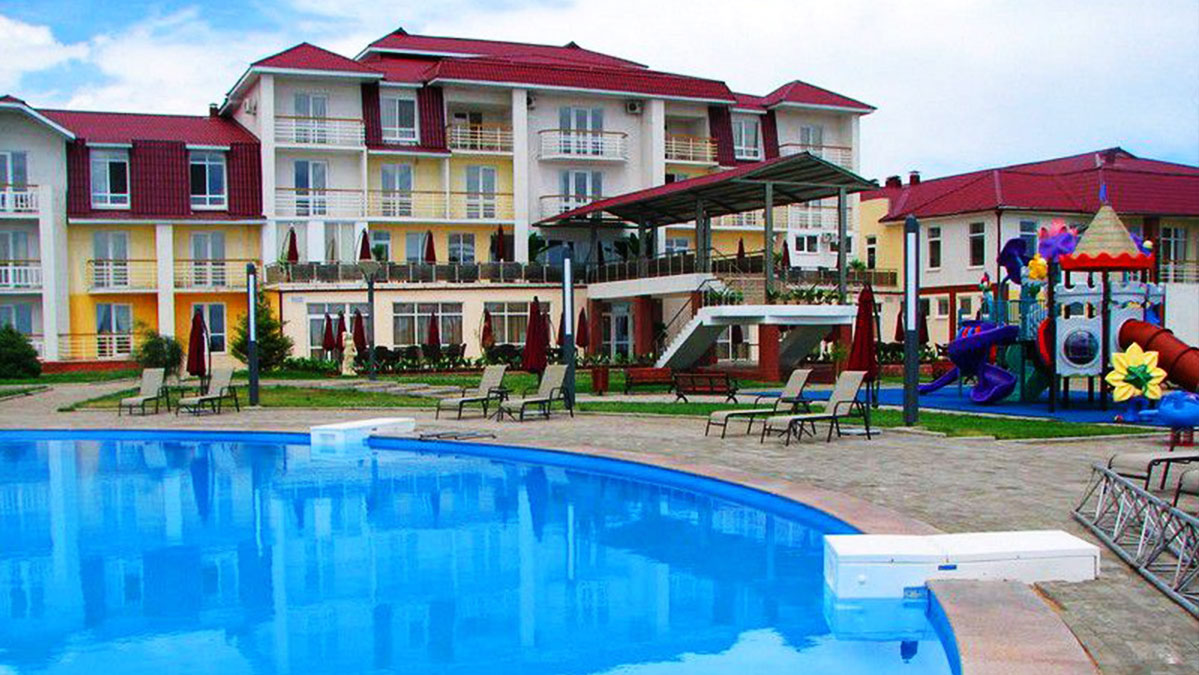 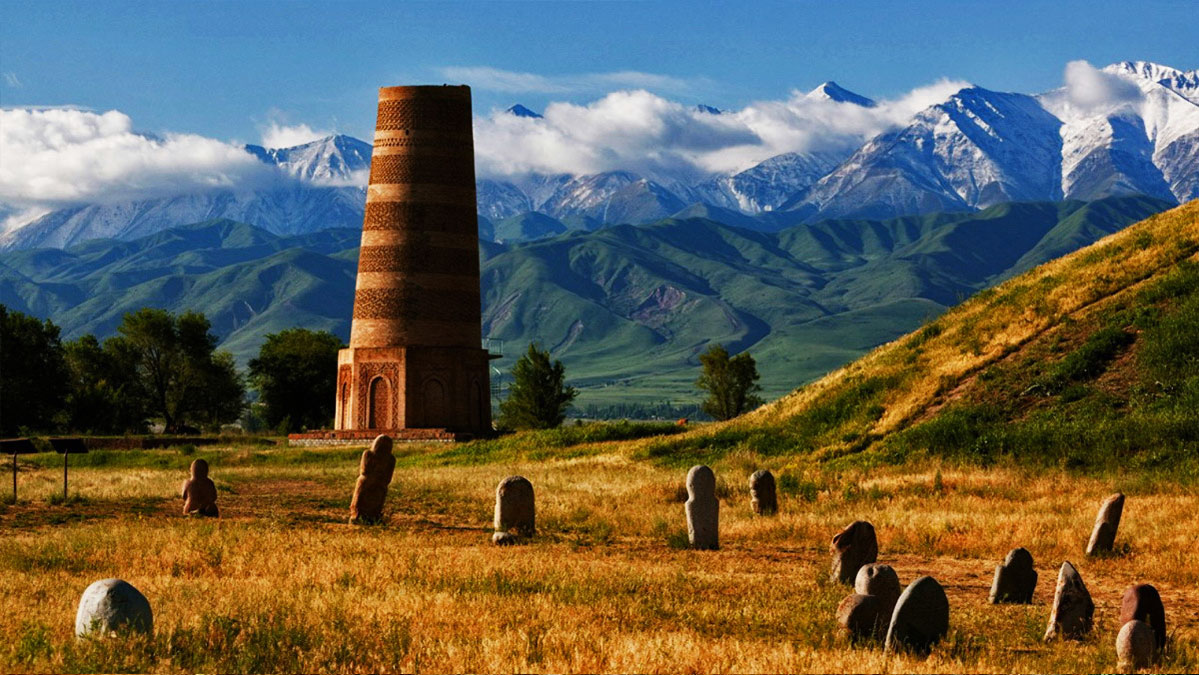